6 Festivals in Ecuador: Your Guide to Traditional Ecuadorian Experiences

Ecuadorians love to celebrate. And celebrate they do. Each year is sprinkled with some iconic larger than-life festivals. Brightly colored traditions, electrifying festivities, and local delicious food are often what make up the biggest event of the year in many communities. A great way to know a country, its customs, and its people is to celebrate in their festivities, full of rich culture and authenticity. Holy Week is around the corner (Easter is April 12, 2020), so we want to not only highlight the festivities surrounding Holy Week but other major festivals in Ecuador throughout the year. We start with the  upcoming Holy Week and work our way through the year.

Holy Week is a time of celebration but with a focus on somber reflection as opposed to the large parties that other holidays see. A largely theatrical display, Holy Week in Quito fervently demonstrates penitence and sorrow. In the most important event of the week, locals recreate a dramatic procession of Jesus’ steps to his crucifixion. Thousands of people walk in this passionate demonstration of repentance. The procession, called the Jesus of Great Power procession, takes place on Holy Friday. It starts in the morning and ends around 3pm, the hour it is believed that Jesus died. Characters include the cucuruchos, a word that literally means “cone.” These are men and women dressed in purple robes wearing pointy cones upon their heads. Thousands of cucuruchos walk among Jesus’ journey, symbolizing penitents who are wanting to repent and turn away from sin.

They often walk barefoot and some carry heavy crosses, which are meant to be painful acts of penitence. Additional characters include the Veronicas, women with their faces covered in veils who walk alongside Jesus. They dress in purple robes and don the veils in reverence for the woman who used her veil to wipe Jesus’ face.The last float to appear carries the Jesús del Gran Poder statue, a 17th-century work of art depicting Jesus’ journey to the cross. This wooden statue is a symbol of hope and faith for many who live in Quito. Witnessing the entire procession evokes feelings of both beauty and pain. If you want to take
part in this exquisite cultural experience, we recommend arriving early as massive crows line the demonstration route. People anticipate Holy Week several weeks prior when signs for fanesca begin appearing. Fanesca is a traditional soup that is only eaten in the weeks leading up to Easter. This customary soup is a rich concoction of twelve different grains (representing the twelve disciples) and salted fish. It contains squash, beans, cheese, peas, corn, and peanuts and is garnished with hard boiled eggs, empanadas, avocado, and fried plantains. Many Ecuadorians enjoy it with family as its creation and consumption is a social family activity. Competition remains stiff between restaurants in efforts to create the best fanesca. 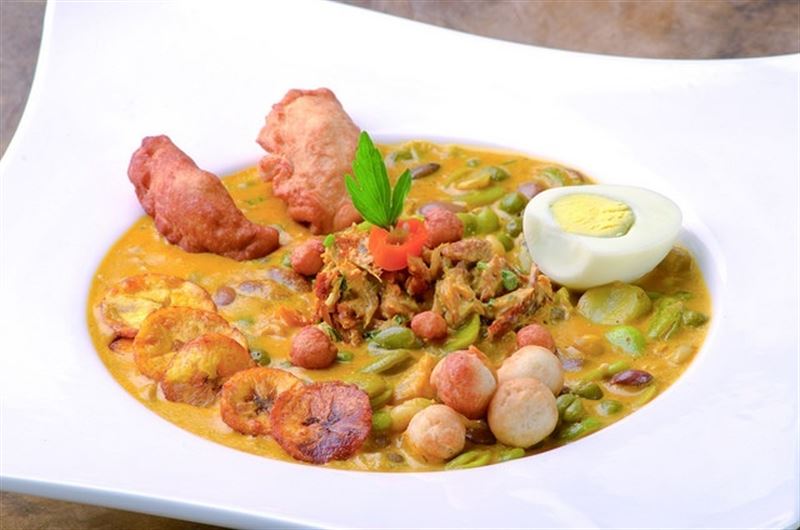 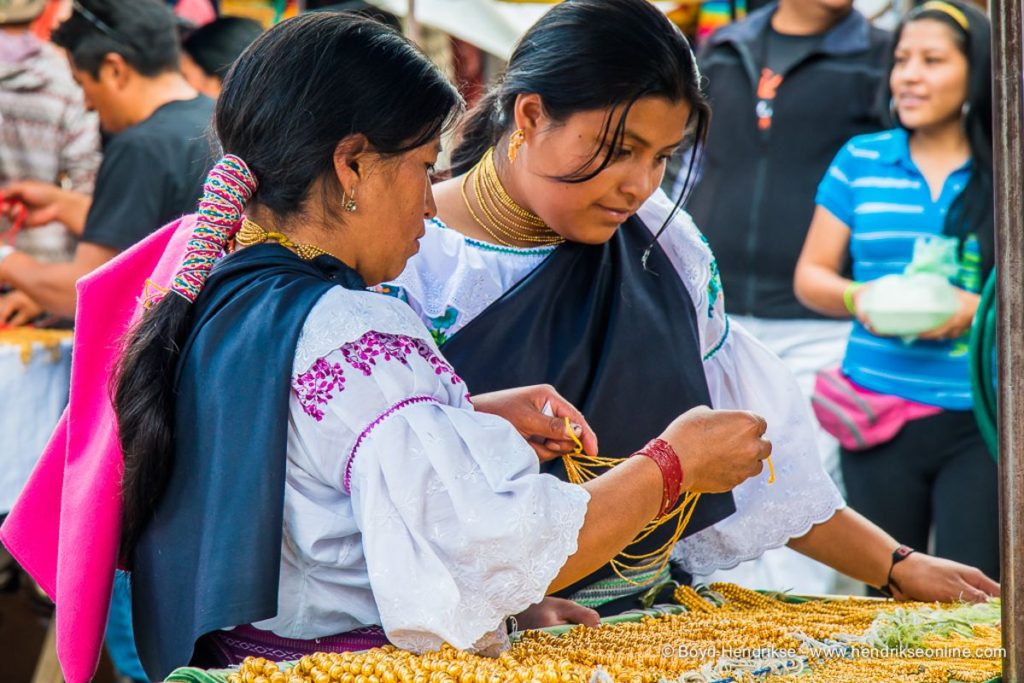 Inti Raymi, or the Festival of the Sun, lasts several weeks from the end of June to the beginning of July, centering around the June solstice. The ritual serves to give thanks to Inti, the ancient Incan sun god,
for giving the energy that provides the harvest. It is perhaps the biggest and most important indigenous
celebration in Ecuador.
Clad in wool chaps, communities, especially those around Otavalo, spend most of the festival dancing,
drinking, and eating. Aya Uma is a relevant character throughout the festivities. The leader of each community wears the Aya Uma mask, which is composed of two faces to represent the dualities of this
world: sun and moon, night and day, south and north, past and future. Historically considered the
“devil’s mask” by the Spanish, the indigenous population consider Aya Uma to be a mythological
spirit that ought to be highly respected.
Traditional food is served pambamesa style, meaning the food is served on a tablecloth that lies on the
ground. Eating from the ground is a means to receive energy from mother earth. Food includes beans,
corn, potatoes, and guinea pig. People often eat from a pambamesa with their hands. Alongside the
food, community members drink chicha, a traditional drink made of fermented corn.
Inti Raymi consists of a lot of dancing. In many communities, the dancing goes well into the night.
Ritual purification is also an important part of Inti Raymi. In bodies of water such as Cuicocha lagoon
and Peguche waterfall, communities parktake in ritual cleansings in order to dispose of negative
energy, renew positive energy, and reinforce their bond with mother nature.

Inti Raymi consists of several weeks full of dance, music, food, and spiritual rituals. If you want to
participate in the country’s most significant indigenous festival, we recommend joining the festivities
with a guide.

This weeklong festival takes place the first week of September in the Otavalo region. Yamor is a
traditional drink consisting of seven different types of corn. It is typically non-alcoholic, although
those that are fermented longer contain alcohol. During the festivities, there are ample opportunities
to try yamor as well as other traditional food and drink. The purpose of the festivities is to thank
mother earth for the corn harvest. Corn is revered here, as it is a staple food in the area.
There are many reasons to visit the Yamor Festival. The celebration includes a grand parade containing
floats, dancers, and traditional Andean music. This music can be found all throughout the festival, as
there are concerts and live music during the week by national and international artists. Other activities
include fireworks, bull fighting (the bull is not killed), and one popular event in which swimmers
compete in a swimming competition across the icy waters of San Pablo lake. A Yamor Festival Queen
is crowned, and she oversees many of the week’s festivities.
Foreign travelers and locals alike express the excitement of the Yamor Festival. If you are in Ecuador
during the beginning of September, we recommend that you check it out for an unforgettable
experience.

A vibrant festival celebrated twice a year in September and November, Mama Negra is Latacunga’s
biggest event of the year. The celebration is strikingly beautiful, as traditions combine Spanish,
African, and indigenous influence. Thousands of locals and tourists gather as onlookers of a tradition
that processes through the streets of Latacunga. This tradition is a parade composed of fanciful
characters, and the highlight is of course Mama Negra, the Black Mother. Musicians, dancers, and
bands are all a part of this grand theatrical celebration, which concludes with an appearance of Mama
Negra on horseback. What Mama Negra represents differs based on who you ask. Some say she is a mix
of the Virgin Mary and African deities, while others say that she is a liberated slave that became the
matriarch of the slaves that were brought to Ecuador. Mama Negra is draped in a ornate outfit, carries
a doll, and splashes scented milk on spectators. 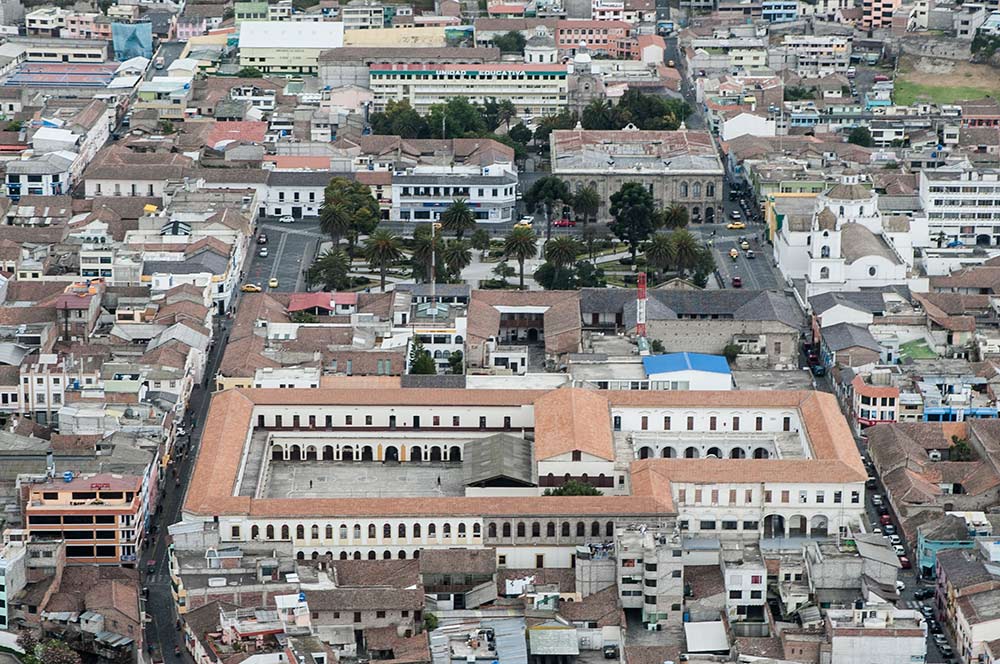 The festival originated in 1742 following the eruption of Cotopaxi volcano. Residents prayed to the
Virgin of Mercy to save Latacunga, which is directly in Cotopaxi’s fiery path. When the city was ultimately spared, locals created the annual festivity in honor of the Virgin of Mercy. Mama Negra is a
unique multicultural experience that you won’t forget. If you are in Ecuador around the time of the
festival, add a trip to Latacunga to your itinerary and witness this exuberant parade for yourself.

New Year’s Eve is celebrated all throughout the country from small towns to big cities. Ecuadorians
observe this global holiday with their own amusing traditions, and they celebrate with tremendous
zeal. One of the funniest customs is the tradition of the viudas or “widows.” Men dressed up as
women, the viudas, dance in the streets, stopping cars and asking for money.
Dolls are a central character of the NYE celebrations. These dolls are made out of cardboard and
newspaper and often represent politicians and popular personalities, such as superheroes and cartoon
characters. Some families make their own, and they can be purchased as well. In the days leading up to
the holiday, the streets are full of vendors selling dolls. In Guayaquil, the dolls are massive. In Quito, a
contest of highly detailed super-sized dolls is held one of the capital’s main streets, and they usually
reflect the news and politics within the last year. At midnight all the dolls are burned, representing
burning the bad from the previous year and looking forward to positive things to come within the
New Year. Families jump over their burning dolls, symbolizing self-purification for the New Year.
Fireworks light up the sky at midnight. Salinas is the best city in Ecuador to view fireworks. Another
common New Year’s Eve tradition in Ecuador is to wear red and yellow undergarments—yellow for
luck and prosperity and red for love in the coming New Year. Stalls on the streets in all big cities in
Ecuador sell yellow and red undergarments, should you be lacking.
New Year’s Eve is a great time to visit Ecuador, as you can experience the unique Ecuadorian traditions
of this holiday and then start your New Year off with a bang, traveling to places like the Amazon
rainforest and the Galapagos.

Carnival occurs right before Lent, so its people’s last opportunity to have some crazy fun before the
somber religious season. Carnival is characterized by spraying foam at anyone and everyone. People
also use buckets of water and water balloons to make passerbys soaking wet. It&#39;s all for entertainment,
and those that do the soaking often get soaked right back. In many cities throughout Ecuador, you’ll
find parades and festivals. Check out our recent article on Carnival for more details into how different
cities within Ecuador celebrate Carnival!

Like many festival traditions in Latin America, festivals in Ecuador are a fusion of Catholic influence
and indigenous culture. From the craziest of festivals to the more somber religious celebrations, these
holidays tend to be full of life and color. Holy Week is coming up soon. Enjoy the most important
religious holiday in Ecuador with Gulliver Expeditions. Enjoy any of Ecuador’s festivals with Gulliver;