Ecuador has three regions (four if you include the Galapagos Islands). All regions offer their own unique landscape, traditions, cuisines and flora and fauna. When you go from the west to the east, within hours you will feel like you ended up in a different part of the world. The Ecuadorian Amazon is one of those breath-taking regions that you should visit, read more to find out why you should pay a visit!

1. The Amazon rainforest is one of the most bio-diverse places on earth

While Ecuador is a relatively small country, it is home to an incredible variety of flora and fauna. It has one of the highest ratios of land area / biodiversity of the whole planet. According to Anthony Di Fiore, primatologist at New York University a study demonstrated that Ecuador’s Yasuní National Park is ‘’convincingly the most diverse area in South America, and possibly the world,” (dotearth.nytimes.com, 2010)

The whole Amazon Rainforest is about seven percent of the world’s land area but is accountable for about half of the earths plant species. Thousands of species of plants and trees grow in the rainforest. In one hectare of forest more species of trees can be found than in the whole of North-America.

There are an estimated 1600 bird species in Ecuador, that is double the amount of species that live in North America! Over 800 species of fish, 350 species of reptiles, more than 300 mammal species and thousands of insect species can be found in the Yasuní reserve.

2. The Ecuadorian Amazon is very accessible

Of course, when you want to experience untouched nature and wildlife, it’s obvious that it is not easy to get to. Luckily Ecuador is a very small country, and from Quito it is possible to reach the mountains within an hour and the Amazon and the coast within a few hours.

Depending on where in the Amazon you are planning to go, most places are easily reachable by bus. The more wildlife you want to see, the more likely you must travel for a longer time. There are many buses leaving from the Quitumbe terminal in Quito to bring you to the ‘’oriente’’. Popular entrance points are Lago Agrio about 7 hours by bus, Tena, about 6 hours and Coca 11 hours.

A quicker but more expensive way to reach the Amazon rainforest is by airplane. There are three daily flights to Lago Agrio from Quito, and a flight takes about 40 minutes.

There are two daily flights to Coca from Quito, taking about 35 minutes.

Whether option you chose, you will most likely need to take a canoe for a few hours to get to your accommodation.  This exceptional way of transport will already give you the first impression of what awaits you when you get deeper in the jungle. From anaconda’s to monkeys and the first bright coloured birds to maybe even Caymans, so make sure to observe your surroundings with attention!

3. There are still ancient tribes living in the Amazon.

Many small tribes still live in isolation in the Ecuadorian Amazon. There are for example still between 2000 to 3000 people who call themselves Huaorani and live deep inside the Amazon rainforest. The huaorani, also known as the Waos were first discovered in the late 1940’s when Shell started drilling for oil in the forest. They quickly abandoned their work, as the local tribe fiercely scared away the employees. The tribe is not called ‘Auca’ or ‘savage’ in Quechua for nothing.

This tribe has been living isolated for manyyears, even after their discovery they did not adapt to modern ways of living. They still speak their own Huaorani language, which is so far known not related to any other language.

Many of the tribes still use traditional hunting methods like blowing pipes and have shamanic rituals. Depending on your tour you might end up meeting a unique culture and get to know the way of life of these extraordinary tribes.

Many people do expect to only find dolphins in the salty ocean, but did you know that Dolphins can be found in the Amazon river?

This striking, intelligent animal can be found in different shades, ranging from pink to grey. At birth the dolphins are fully grey but slowly grow to become pink during their adulthood. Even when they have reached adulthood their colours still vary based upon their diet, exposure to sunlight and general feeling.

These funny looking creatures can become up to 30 years old and weigh over more than 180 kilos! While they look a bit clumsy do not mistake their agility. These dolphins have evolved to become very flexible and have mastered the ability of underwater movement, even in the murky rivers full of obstacles.

5. A sustainable form of tourism

In modern days it is very important to take the environment into account. With increasing pollution and exploitation of natural resources, natural habitat of many animals animals is becoming endangered. Ecuador however, is the leading green destination of 2017  and has been the winner since 2013. 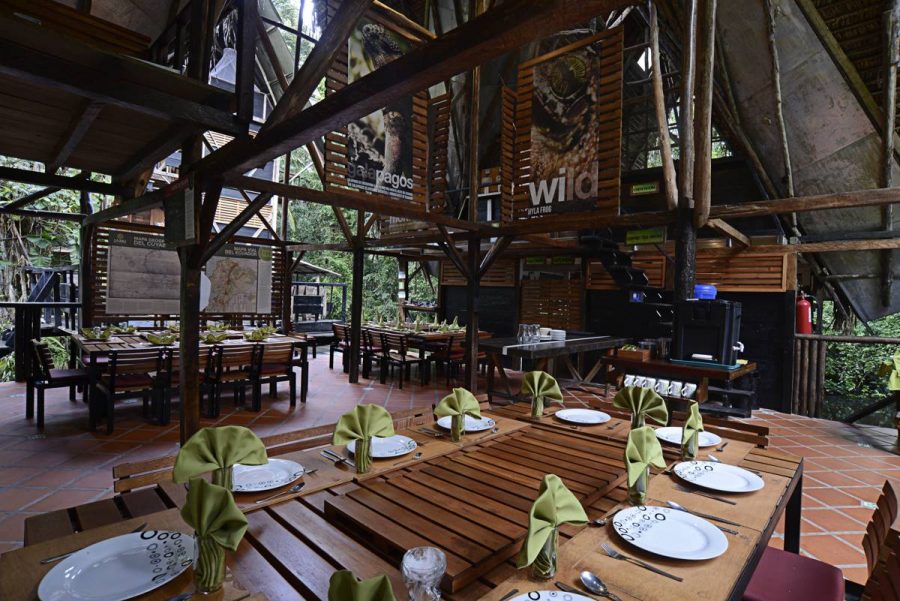 Since the Amazon is largely a protected National Park, the lodges and activities are all required to minimize environmental impact. The Jamu Lodge, for instance, applies proper water treatment methods, it uses renewable power sources, and collaborates with indigenous communities. Products bought by the lodge are subject to a policy that reduces packaging, and thus unnecessary waste. This makes the Ecuadorian Amazon a good option for a very green destination.