Christmas in Ecuador, Like in other countries, the Ecuadorians traditionally celebrate Christmas with the loved ones and it is all about spending time with family and friends. But it wouldn’t be Ecuador, if the “celebration of love” isn’t influenced by the Latino temperament. In the whole month of December are pre‑Christmas celebrations, like festivals, concerts and dance performances taking place in the country, starting with the “Fiestas de Quito” from the 1st to the 6th December, honoring the foundation of the capital city. During this time are the streets filled with the sounds of “La Chivas Quiteña”, a bus likewise vehicle, converted to a driving disco, which is passing through the streets of Quito, while the passengers celebrate with canelazo.

As a predominantly Catholic country, plays also the religion a significant part during Christmas. Nine days before Christmas Eve, on the 15th of December start the Christmas Novenas. The people meet in churches and parish rooms to sing together and to read out poems in honor of the Christ Child, accompanied by incense, hot chocolate and cookies.

The most famous Novenas take place in Cuenca and culminate in the Pase del Niño Viajero on the 24th of December, which is the largest and best Christmas pageant of Ecuador. The parade last the whole day and illustrates the long journey of Joseph and Mary, led by the guiding star, accompanied by angels, the three kings, shepherds and a huge number of costumed children. The Niño Viajero is taken on a float through the city to the Catedral de la Inmaculada, where the birth of Jesus Christ is honored with religious services. But the parade has also some native influence. Horses and llamas are carrying local products and sweets, marching with musicians and creating a colorful display.

Another tradition is to create ornate cribs, which are displayed inside or in front of the houses. The biggest one is build up at the Panecillo, which is lightened up with over 60 000 lights. It’s a traditional portrayal of the birth of the Christ Child, with Joseph and the three Magi next to the Maria.

Finally on Christmas Eve, the Ecuadorians meet with their families for a big dinner. Traditionally they have sucking pig or turkey, accompanied by culinary treats of the season. For desserts they eat chocolate cake or Buñelos, which are sweet dough balls, served with a sauce of honey and caramel. Of course attending the Midnight mass and watching the nativity play may not be missed out. They also put up a Christmas tree, which is richly and motley decorated.

The ultimate Christmas celebrations take place in the town La Merced, where they celebrate until February, while the town Calderón is famous for its Christmas marzipan figures.

Get in touch with us to plan your Christmas festivities!

Ecuador 4 Seasons in One Day 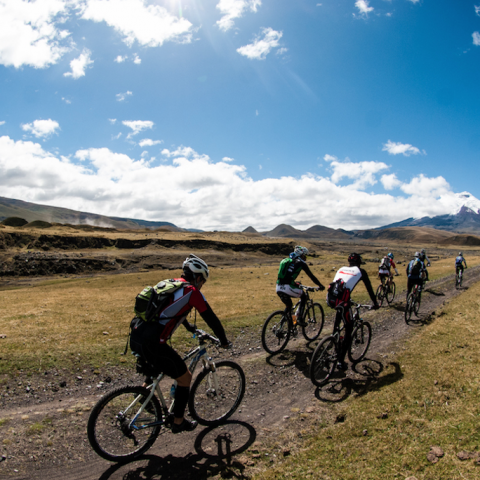