The Galapagos Islands are an archipelago of volcanic islands that are located around the Equator in the Pacific Ocean. They are a UNESCO World Heritage site. Nowadays 97% of the area is a National Park to protect the unique nature and species.

“Due to late colonization of man, Galapagos preserves today most of its original biodiverstiy./>

Ecuador is the most biodiverse country on Earth and there are several different ecosystems within it. The Galapagos Islands have are their own ecosystems and are famous for a wealth of unique plants and animals found nowhere else in the world.

On the Galapagos Islands, there are three major ecosystems: terrestrial, coastal and marine. In the years of El Niño, the ecosystems show their characteristic behaviours. In the terrestrial zone predominate heavy rains, which has a positive effect on the animals and plants in this zone. In contrast, in the marine and coastal zone the highwater seaweed is destroyed, which causes marine iguanas to starve and they are unable to reproduce.

The organisms on Galapagos are all originated from organisms brought in by sea currents, air currents or birds. Because of the distance between the Galapagos and the mainland, an unrivalled evolution has taken place. Furthermore they were the source of Darwin’s (1809-1882) theory of evolution and still remain an amazing laboratory for scientists today. In his honor they built the Charles Darwin Station to breed more Giant Tortoises, where also the famous Lonesome George lived until he died.

Join the adventure with us!

These species can only be found on Galapagos.

The Ecosystem in Galapagos 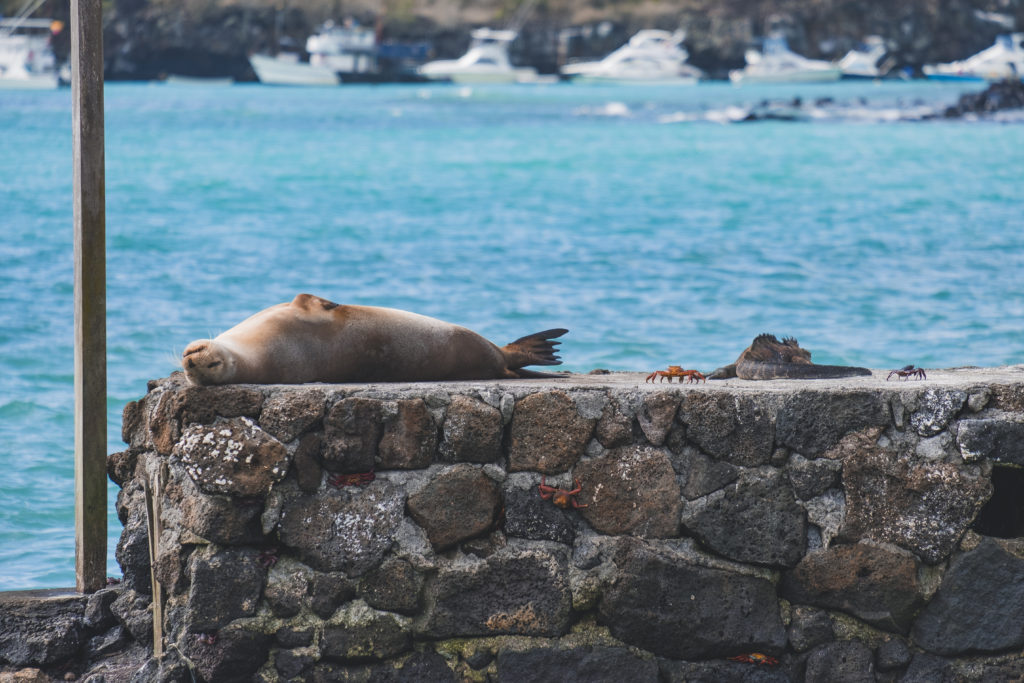 This ecosystem is threatened by illegal fishing, non-native species and the demands of more than 160,000 tourists each year. Ecological damage was caused long ago by whalers, pirates and early settlers and the presence of aggressive introduced species. This has disrupted natural biological processes in Galapagos. One big plague were the goats that were brought from the mainland. They were killed out of helicopters a few years ago, to preserve the Islands.

The Islands suffer also from similar problems like other volcanic islands that are for example the shortage of fresh water and the presence of persistent soil. But unlike other islands, Galapagos still has a lot of its own biodiversity. The key to maintain this ecosystem is to let it work with little influence by man.

The Global Strategy for Nature Conservation identifies Galapagos as a priority biogeographical province for the establishment of protected areas. Because of this, the inhabitants but also the tourists have to follow certain rules to not distrub the ecosystem. Sometimes it can be difficult for the inhabitants to live in this area due to so many strict rules. Everything that happens on these Islands is controlled by the government of Ecuador. You have to get different licences for every kind of work.

Fishermen for example can only do their job in small boats without a sunglind, without nets or motor-powered hoists. On the islands there are almost no cars. People are only allowed to have a car, when you need it for your work. Otherwise they have to use a taxi or bike.

Due to all that facts, Galapagos is a quiet paradise with animals and plants you will not find in any other place.

Are you interested in visiting a place that is so unique, natural and breathtaking?? Contact us!  We can help you planning the perfect trip for you!!!

Above the clouds with Gulliver