Galapagos is a unique destination on the planet, no wonder has been declared UNESCO World Heritage due to the endless diversity of fauna and flora this archipelago has, including species that you will only see here. During this tour, you will have the opportunity to know the most important islands with activities that include Española Island, Kicker Rock, Santa Cruz Highlands, Isabela Island, and much more.

Upon your arrival at San Cristobal airport, a driver will be waiting to transfer you to your hotel.  In the afternoon you can use your free time to visit the small port town of Puerto Baquerizo or nearby beaches or the Interpretation Center, which is the archipelago’s administrative center.  It has a great exhibition on both human and natural history in the islands.

Located two hours from San Cristobal is Espanola Island, the southernmost and oldest of all islands in the archipelago.  The island’s flat profile is extremely dry with only a few inches of rainfall per year.  Despite the dry climate, the island is one of the world’s only known nesting sites of the Waved Albatross or Galapagos Albatross.  From April to December, this island is covered with these adorably clumsy birds.  Their body is disproportionate to their legs and feet as they spend most of their lives on the water or flying and only walk to mate with their lifelong partner.

Their mating dance is spectacular to watch as they clumsily walk and smack their beaks together with their mates year after year.  You’ll also be greeted by marine iguanas, the males will turn shades of green and bright red during the mating season, earning them the nickname of Christmas iguanas.  Here a visit to Gardner Bay for snorkeling opportunities completes the visit.  Whale sightings are common (but not guaranteed) during the open water transfer to/from Espanola and back to San Cristobal.

Kicker Rock is an eroded rock formation in the ocean located off the shores of San Cristobal.  Locals call it “Leon Dormido” or sleeping lion due to its massive shape and similarity to a lion when looking at it from a unique angle.  The two rocks that form this visitor site are remnants of a vertical tuff cone formation, most likely from an eruption millions of years ago.  Over time the sea eroded the rock, creating an open space in the middle that made a haven for aquatic life.  Above the sea, the rocks are now home to many sea birds such as Nazca boobies, blue-footed boobies, and other tropical birds.  Below the surface, Galapagos sharks, manta rays, huge schools of fish, octopus, and various tropical fish can be seen.

On this day you will be offered a day tour from the following three options North Seymour, Bartolome, or Plazas Island. All-day tours in the Galapagos Islands are subject to availability, which is why we offer one of these three tours to all passengers.

North Seymour Island is teeming with wildlife and is one of the best visitor sites in the Galapagos! You may have to give way to a passing sea lion or marine iguana because they are everywhere. Blue-footed boobies nest on either side of the trail where mating pairs will perform their courtship dance. Further along the rocky shore a strip of white-sand lies inland and large flocks of sea birds are seen in massive communities in feeding frenzies, diving into the ocean all at once; rendering a picturesque scene the same as ages long past. The trail in North Seymour Island also turns inland to reveal the largest nesting site of the magnificent frigate birds in the Galapagos Islands. These huge acrobats have a 5-foot wingspan and males display bright red, scarlet gular pouches when on the lookout for a mate. These frigate birds can be seen sitting precariously on low branches watching over their chicks.

most famous is the Pinnacle Rock and the panoramic views from atop at the end of the boarded walkway. The walk takes you through recent volcanic eruptions just over 100 years ago that make the island resemble Mars. This is also a great snorkeling site due to the abundance of shelter the underwater rocks and lava flows have created.

The Plazas are a pair of islets that are situated off the eastern coast of Santa Cruz. Only the island of South Plazas can be visited and is a great example of geological uplift, meaning that it was pushed up to the surface from volcanic activity; creating a beach-like atmosphere on one side, while a cliff rests on the opposite.

This island is home to a large colony of sea lions and the trail leads to cliffs in a combined environment of coastal and dry vegetation zones. Prickly pear cactus and sesuvium plants can be seen in contrasting reds during the dry season. Land iguanas are prominent here as they are always searching for pears falling from the cacti.

“On this day you’ll take a speedboat to Isabela Island. Keep in mind that water taxis to and from the piers and the speedboats cost $1 per person. Upon your arrival, you will be transported to your hotel and then you will continue to the Arnaldo Tupiza Breeding Center of Isabela Island. Here, you can walk through the different Galapagos tortoise pens which have a fully-functioning breeding program with the main purpose of growing each specie of Galapagos Tortoises to stable populations. Eventually, these tortoises will be relocated to their appropriate island since each species of Galapagos tortoise comes from a different island in the archipelago.

This is the most spectacular site for scuba diving on Isabela Island. The water is shallow, calm, and very clear- a sea sanctuary. A series of lava flows have produced unique geological formations, a series of arcs and tunnels underneath and above the water- a habitat for many local Galapagos Species. The entrance to the site is shallow and the waves can be strong, for this reason, the access can be complicated. The best time to visit the tunnels is between January and May.

It is an exciting boat Adventure to a very unique geological site, a snorkeling paradise, and home to various species of incomparable enchanted islands. There is an extension of 800 meters and an average temperature between 18 and 22 degrees Celsius. Large quantities of seabirds such as the Albatros, Flamingos, Blue Footed Boobies, and the magnificent frigate bird, are on the banks, where you can also see distinct species feeding such as the tortoises, iguanas, sea lions, manta rays, penguins, lobsters, and sea snakes. In a geographic context of countless colors and textures due to the different types of volcanic lava and the colorful desert vegetation which includes Xerophytic plants among cactus, “Palo Santo” (holy wood), and carob trees.

Day 7: Speed boat + Transfer out flight back to Quito or Guayaquil

At 5:20 am a driver will be waiting to transfer you from your hotel to the Isabela pier for your speedboat ride back to Santa Cruz. Once you have returned to Santa Cruz a Spanish-speaking driver will take you to the Itabaca Channel, crossing through the highlands of Santa Cruz. From there, you will cross the Itabaca Channel back to Baltra Island to ride the bus back to the airport for your flight back to mainland Ecuador.

Good luck, have fun and enjoy your adventure! 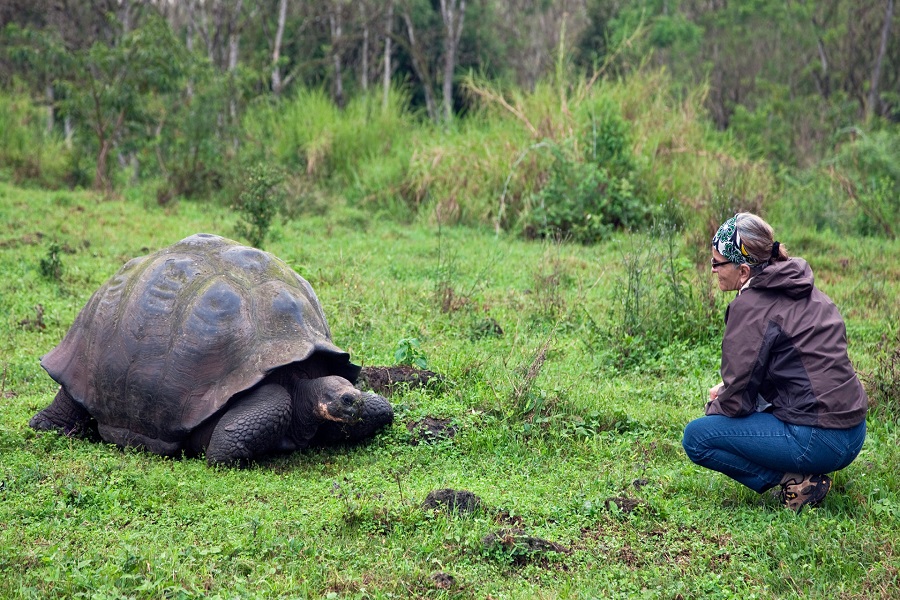 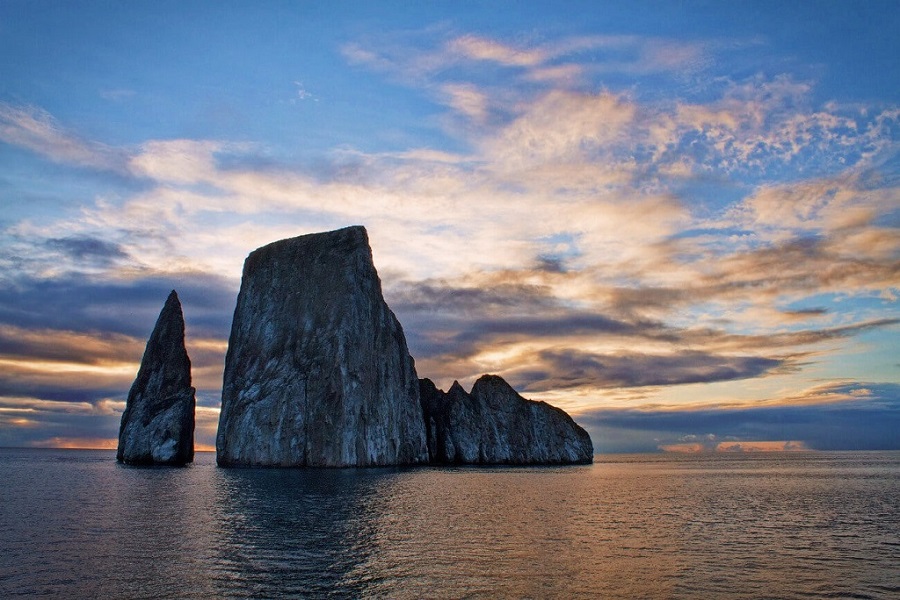 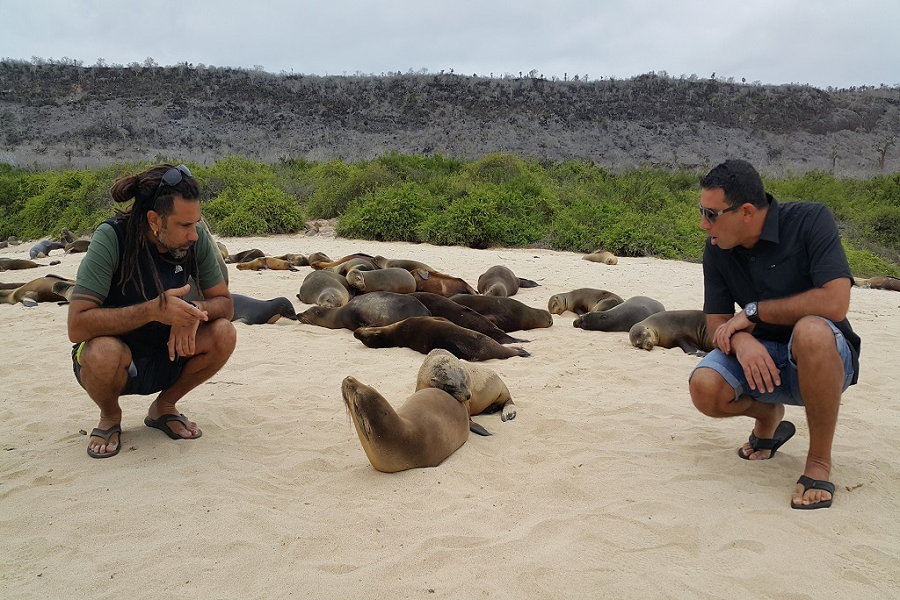