The Galapagos Islands are a truly unique travel destination and it’s no wonder they have been declared a UNESCO World Heritage Site. With an endless diversity of fauna and flora, this archipelago is also home to species you won’t find anywhere else in the world. 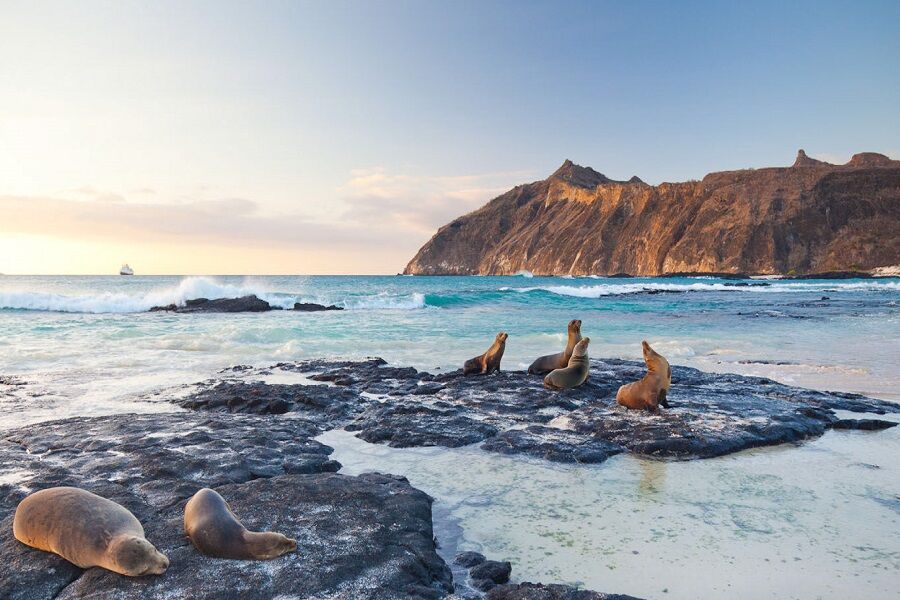 The Galapagos region is composed by 13 great islands (with an area greater than 10 km²), 6 medium islands (with surface areas ranging from 1 km² to 10 km²), and 107 rocks and islets (small size).

If you want to have an amazing island hopping tour in this paradise then read on as we discuss some of the must-see islands in the Galapagos!:

Santa Cruz is known for its white sand beaches such as El Garrapatero. The city of Puerto Ayora is the tourist center of the archipelago. Here, the Charles Darwin Research Station has a breeding program for giant turtles, an endangered species that lives in the El Chato reserve. In Tortuga Bay there are sea turtles and marine iguanas. The lava tunnels and craters of Los Gemelos also provide excellent visitor attractions.

Join the adventure with Gulliver

The Plazas are a pair of islets situated just off the east coast of Santa Cruz. There is often a sea lion guarding the natural dock, but a simple clapping of the guide’s hands will ensure it departs back to sea prior to your boat coming in to dock..

It is a dry vegetation zone with prickly pear cactus and extensive patches of salt-tolerant sesuvium. The sesuvium is usually seen as distinctive red mats, although it turns bright green when rainfall is abundant.

Española is the southernmost island and one of the oldest in the Galapagos archipelago. It is one of the world’s only known nesting sites for the Waved Albatross (Galapagos Albatross). From April to December, this island is covered with these adorably clumsy birds. Blue-Footed and Nazca Boobies as well as many other bird species also call this island home.

Another unique species found only on Española Island is the Green and Red Marine Iguana (also known as Christmas Iguanas). A visit to Gardner Bay for some open water snorkeling completes this island visit.

The capital of the archipelago, Puerto Baquerizo Moreno, is located in the southwestern end of this island. This part houses frigates, sea lions, giant turtles, red-footed gannets, blue-footed gannets, marine iguanas, dolphins, and seagulls. In the nearby waters there are sharks, rays and lobsters.

Looking for some tour to this amazing island?

Kicker Rock is a stone formation located on the coast of Isla San Cristobal. It is a magnificent island in the middle of the sea and is shaped like a giant sleeping lion. The rocks are remnants of a vertical tuff stone conformation and is the favorite place for the shelter of several species of seabirds. The main activities on the island are snorkeling and diving with the opportunity to witness Galapagos sharks, hammerhead sharks, sea turtles, octopuses and an array of tropical fish. Depending on the season you may also see dolphins and whales.

North Seymour Island is teeming with life and is a great visitor site on Galapagos. While exploring you might have to give way to a passing sea lion or marine iguana! Blue-footed boobies nest on either side of the trail where mating pairs perform their intriguing courtship dance. Further along the rocky shore, a strand of white sand lies inland and large flocks of seabirds mass for outstanding feeding frenzies. The trail in North Seymour Island turns inland to reveal the nesting site of the magnificent frigate bird – the largest nesting site in the Galapagos. These huge, dark acrobats have a 5-foot wingspan, and males, with inflated scarlet gular pouches, sit precariously in low bushes to watch over their equally large chicks.

Here is where you’ll see the most photographed view of the islands as you walk about 600 meters up to the summit of the island. The walk is surreal, taking you through recent volcanic eruptions and Mars-like landscapes. It’s a journey through evolution, comparing the beginnings of Bartolome to the more developed islands in the archipelago.

This is a great snorkeling spot as well due to the abundance of underwater rocks and formations. Here, look for penguins, sharks, rays, sea stars, flounders and an array of colorful tropical fish.

It was named in honor of Queen Isabel I of Castile, who sponsored the trip of Christopher Columbus. The highest point is the Wolf Volcano, which reaches 1,707 meters above sea level and is one of six volcanoes found on Isabela Island: Ecuador, Wolf, Darwin, Alcedo, Sierra Negra and Cerro Azul (five of them are active). The shape of the island is due to the fusion of these six great volcanoes into a single mass. This island is the only one of the Galapagos that is crossed by the Ecuadorian line.

Looking for a family adventure?

“Las Tintoreras,” is a chain of small islets full of coves and hidden beaches. The islet of Tintoreras is situated in the south of Puerto Villamil. It has a bay where it is possible to see sea lions, marine turtle, iguanas, manta rays, and other stunning wildlife. This bay is connected by a superficial crack with crystalline water which is closed off during low tide. In this crack, it is possible to see the sharks from Blanca Point swimming with the rest of the tropical fish and sea lions.

travel experts will be more than happy to help you admiring them in their full glory.