The Peruvian Andes are a very true wonder of the natural world. With the biggest mountains outside of the Himalayas and the largest mountain chain on the planet, no wonder climbing in Peru has been awe inspiring to humans since their first arrival to these unique landscapes many years ago.

It is the second-highest mountain in Peru and the highest point in the huge Amazon basin. The snowy Yerupajá, is one of the most difficult to climb which is why it has gained worldwide fame for its imposing snowfall and chilling peaks. It is constantly visited by scientists and scholars as well as by athletes who are attracted to the challenge this peak poses. 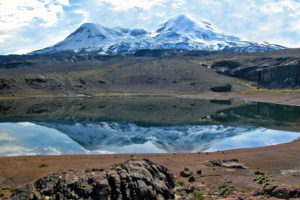 This massive ice-covered stratovolcanic complex has a 12 × 20 kilometer plateau on top, with six cones seated on it.Remains of Inca clothing have been found at a height of 6,000 meters, confirming the activity of pre-Columbian inhabitants in the region. 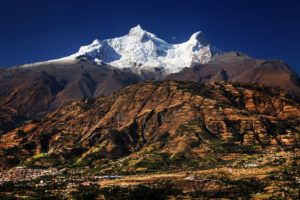 It is located just in front of the great snow-capped Huascarán, separated by the great canyon that forms the Gorge Llanganuco and at whose feet of these mountains lie the famous lagoons of Shinancocha and Orconcocha (Llanganuco lagoon).

The mountain is surrounded by numerous peaks above 5,000 meters in the Cordillera Blanca sector, a 140-kilometer long snow-capped mountain range that is included in the 340,000-hectare Huascarán National Park.

Think you can reach to the top? look for our tours!

It is part of the Vilcanota Mountain Range. The water from its thaws run westward and gives rise to the Vilcanota River which subsequently pours its waters down the Amazon River into the Atlantic Ocean. Its eastern slope feeds several small rivers that culminate in the Inambari River and to the south drains its thaws to Lake Titicaca by the Azángaro River. 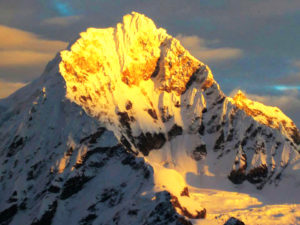 It is part of the Cordillera Blanca. Despite its height, it is considered one of the least complex climbing peaks, so it is very popular among mountaineers.

The Chopicalqui next to the Huascarán make up a single massif, which has led the “Chopi” to be considered as “the little brother” of the Huascarán. 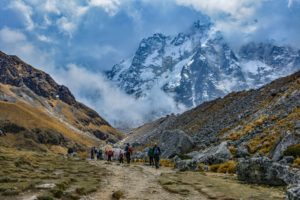 It is one of the highest mountains in the Cusco region, along with the snowy Ausangate in the Vilcanota mountain range which is located further south. It is considered the greatest in its splendid isolation and the greatness of its two-headed mole . It is also one of the mountains of the Andean region that present major technical problems for sport climbing. This is evidenced by the six itineraries open to date by the different slopes of this mountain. Join the adventure to Salkantay with Gulliver! 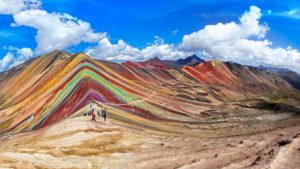 Vinicunca, also known as Seven Colors Mountain, is located on the road to the snowy Ausangate in Cusco. In recent years it has become a tourist sensation and the second most visited tourist destination in Peru. Its slopes and summits are dyed by stripes of intense shades of fuchsia, turquoise, lavender, gold and other colors.

Prepare your luggage for the top and start this great adventure!