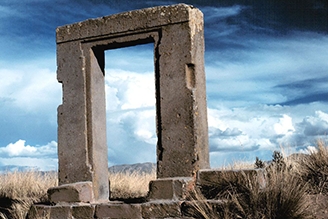 In this blog the beautiful and mysterious Tiwanaku will be described. Tiwanaku is also called Tiahuanaco. The Tiwanaku was a city in Bolivia 10 km distanced from the Titicacalake. It’s not a city anymore, now it’s a place full of old buildings and ruins. It is located at 4000 meter above sea level in the Andes mountains.

The history of Tiwanaku

Tiwanaku has been populated for many hundreds of years by the Tiwanaku-native-Americans. This is a group of people who lived there since 1600 years before Christ. From the year 600 onwards, Tiwanaku was the capital city of the native-Americans. The main reason for this is because of the fact that Tiwanaku is located near the Titicaca lake. In the year 950, the typical inhabitants were going to live somewhere else, and other population groups were living in the city. There was likely a local climate change around the year 1000 that heralded a drought period of around 80 years. The system would not work without water, which may have contributed to the demise of civilization. However, there are also indications of violence and human sacrifices from the final phase of the Tiwanaku civilization. Archaeologists are still doing research and they are still finding native-American objects. The Tiwanaku Empire probably had about a million subjects and the Incas later considered themselves descendants of this civilization. Want to learn more about Bolivia? Take a look at: https://gulliver.com.ec/information-about-bolivia/.

There are a lot of interesting things to see at Tiwanaku. The three main attractions of this ancient city are the following: Museo Iítico de Tiwanaku, the central square and the church. The Museo lítico de Tiwanaku is a museum with a large collection of ceramics, stone structures, metal structures and bone objects. These were, obviously, structures and objects made by the native-Americans. The most important object at this museum is the Monett Benett. This Monett is a memorial stone of around 10 meters high.

One of the other main attractions is the central square. This square was the center of Tiwanaku and therefore, one of the most important places of the native-Americans. The square is also named: Kalasasaya. This square had various monolithic steles in the form of human figures, among other things. There were also two pyramids, the Akapana and the Puma Punku, which must have had a ceremonial function for the native-Americans. The monolithic “Sun Gate”, which is adorned with figures and signs that probably had a calendar function, is also particularly beautiful.

The current archaeological site, located in the Tiahuanacu municipality, is on the UNESCO World Heritage List and is being visited by many tourists every day. You can go to the Tiwanaku site on your own, but for the full experience we recommend you go with a tour. This guide can explain everything about the culture and this place is perfect to combine with many different beautiful locations of Bolivia. Looking for a tour to Bolivia? Take a look at: https://gulliver.com.ec/bolivia-adventures/.

Visit the beauty of Ecuador